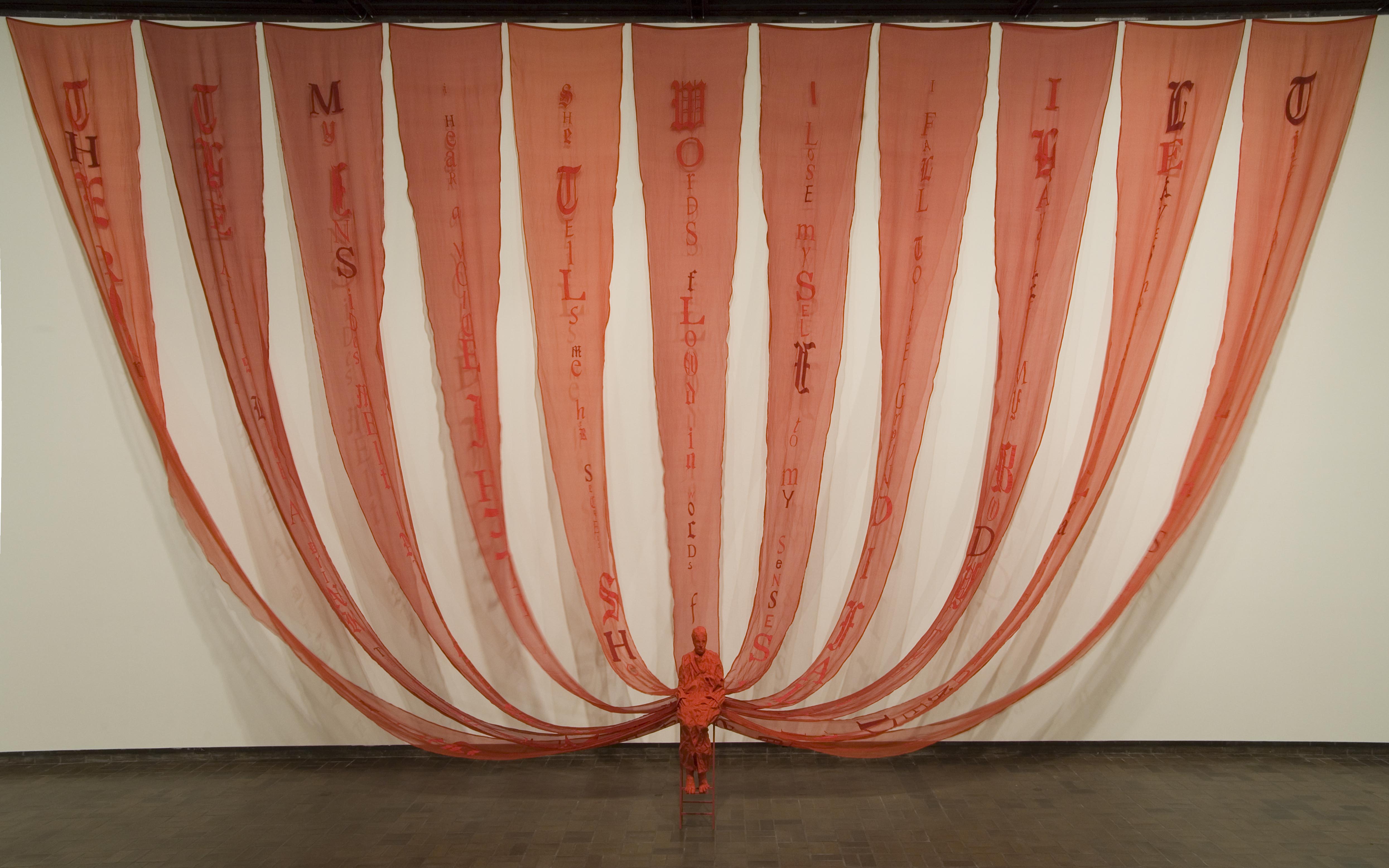 I Heard a Voice

For the last twenty years, Dill has been a sculptor, photographer, printmaker and performance artist, all while consistently exploring the human form, language, sensory experience and their interactions. An English major before she became an artist, Dill found her artistic vision when her mother gave her a book of Emily Dickinson’s poetry. Dickinson’s words resonated with Dill, sparking images that the artist says she just could not ignore.

Dill’s work can be both ephemeral and spiritual, drawing on her travels in India and her interest in Buddhism, as she uses bronze, photography, poetry, thread, wire and paper to sculpt figures and build tapestries. Her pieces give visual form to poetic texts by Emily Dickinson, Salvador Espriu, and Franz Kafka. For Dill, words are her ‘spiritual armor’ and she freely stitches and weaves them across the surfaces of her multi-layered works.

“Language is the touchstone, the pivot point of all my work,” Dill said.

The Hunter exhibition will include 34 pieces from both public and private collections. Some of the sculptures have been created for this exhibit tour, and many have not been shown widely before. A full-color catalog and a video featuring Dill in her studio will accompany the exhibition.

Dill’s spectacular new installations are quite a departure for the artist and are the highlights of the exhibition. With these dramatic pieces, Dill delves into a fresh exploration of the materiality of language and its integration with the human form. In addition, the exhibition will feature the artist’s innovative bronzes and wire pieces. These works push her earlier paper and fabric dress forms into new dimensions.  The tapestry format is explored through horsehair, fabric and netting pieces. Leaves, as metaphors for skin, and hands are motifs that have persisted in Dill’s work for a number of years. The progression of this imagery over time and its melding with words bring together the artist’s explorations of the last decade.

A native of New England, Dill currently lives and works in Brooklyn, New York. She has a Master of Arts for Teaching from Smith College, and a Master of Fine Arts from the Maryland Institute of Art. Dill’s work is internationally recognized, and she has been the focus of several exhibitions, including two that have toured nationally. Awards include a sculpture fellowship from the National Endowment for the Arts and a grant from the Joan Mitchell Foundation. Her work is in numerous major American museums such as the Metropolitan Museum of Art, Museum of Modern Art, the Whitney Museum of American Art, the High Museum and is also in the Hunter Museum’s collection.

After the exhibit closes at Hunter in April, it will travel until 2011 to the Smith College Museum of Art, Northampton, Massachusetts; the Museum of Fine Arts, St. Petersburg, Florida; the Palmer Museum of Art, University Park, Pennsylvania; and the Columbia Museum of Art.

Purchase a catalog of this exhibition at the Hunter Museum Store.

Early voting has begun in Tennessee! Exercise your right to vote and visit the below link to find your polling place in Hamilton County. Wear your "I Voted" sticker to the museum for $1 off of admission.

FIND YOUR POLLING PLACE TO VOTE