After completing this activity, students will better be able to:

Lalla Essaydi, is a Moroccan contemporary artist, primarily known for her carefully constructed photographs of women. Born in 1956, the artist spent her formative years in Marrakesh and eventually moved to the United States, where she studied painting and photography at the School of Museum of Fine Arts at Tufts University. Currently, the New-York based artist divides her time between Morocco and the United States.

Essaydi’s draws from her own cross-cultural experience to investigate the complex roles of Arab women in contemporary and past societies. Many of the artist’s staged photographs depict Arab women adorned with calligraphic Arabic script the artist applies in henna and set in spaces that have been historically reserved for women. This calligraphy is intentionally illegible, making it impossible to decipher. Integral to artist’s work is the iconography of Orientalist art. By subverting popular imagery found in Orientalist paintings, Essaydi draws attention to the fantasies and stereotypes embedded in depictions of North African, Middle Eastern, and Asian women. Some examples of Orientalist motifs Essaydi appropriates and deconstructs are the veil, harem, and odalisque. 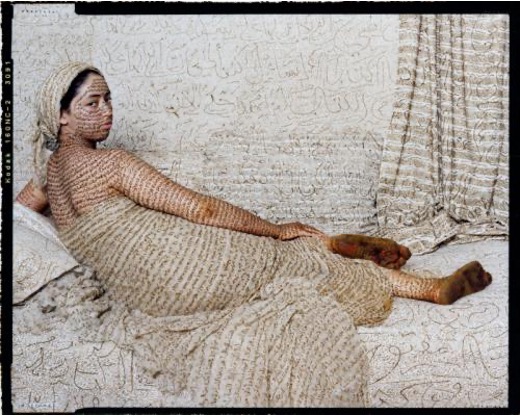 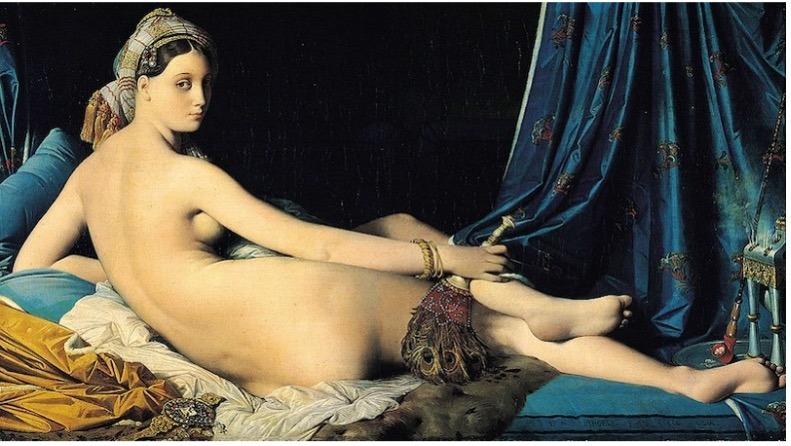 How can art challenge or deconstruct stereotypes

Collage – an art technique in which paper, photographs, and other materials are cut and combined to create a work of art

Orientalism –  a 19th century European art movement, known for its depictions of people and places from North Africa, the Middle East, and Asia. Orientalists painters often mixed reality with fantasy, creating images that misrepresented these regions and the dozens of cultures found there as being hypersexual, barbaric, overly feminine, or exotic.

Henna – a temporary dye made from the henna plant that is used in Mehndi, an art form where henna is applied in decorative patterns directly to the skin

Odalisque – based on the Turkish word for chambermaid (odalık), odalisque was a term used in Europe to describe a female concubine or slave in a harem. Odalisques were a popular subject matter in Orientalist paintings.

Harem – a harem (or seraglio) is the apartments reserved for female members of a household. In the Ottoman Empire, these were the spaces where the wives, unmarried daughters, young sons, unmarried female relatives, mothers, female servants, and concubines of a ruler resided. This was a practice generally reserved for the upper classes, as men and women in poor communities did not typically have separate living quarters.

Using images from magazines, students will create a collage inspired by Essaydi’s work that challenges media representations of men and/or women.