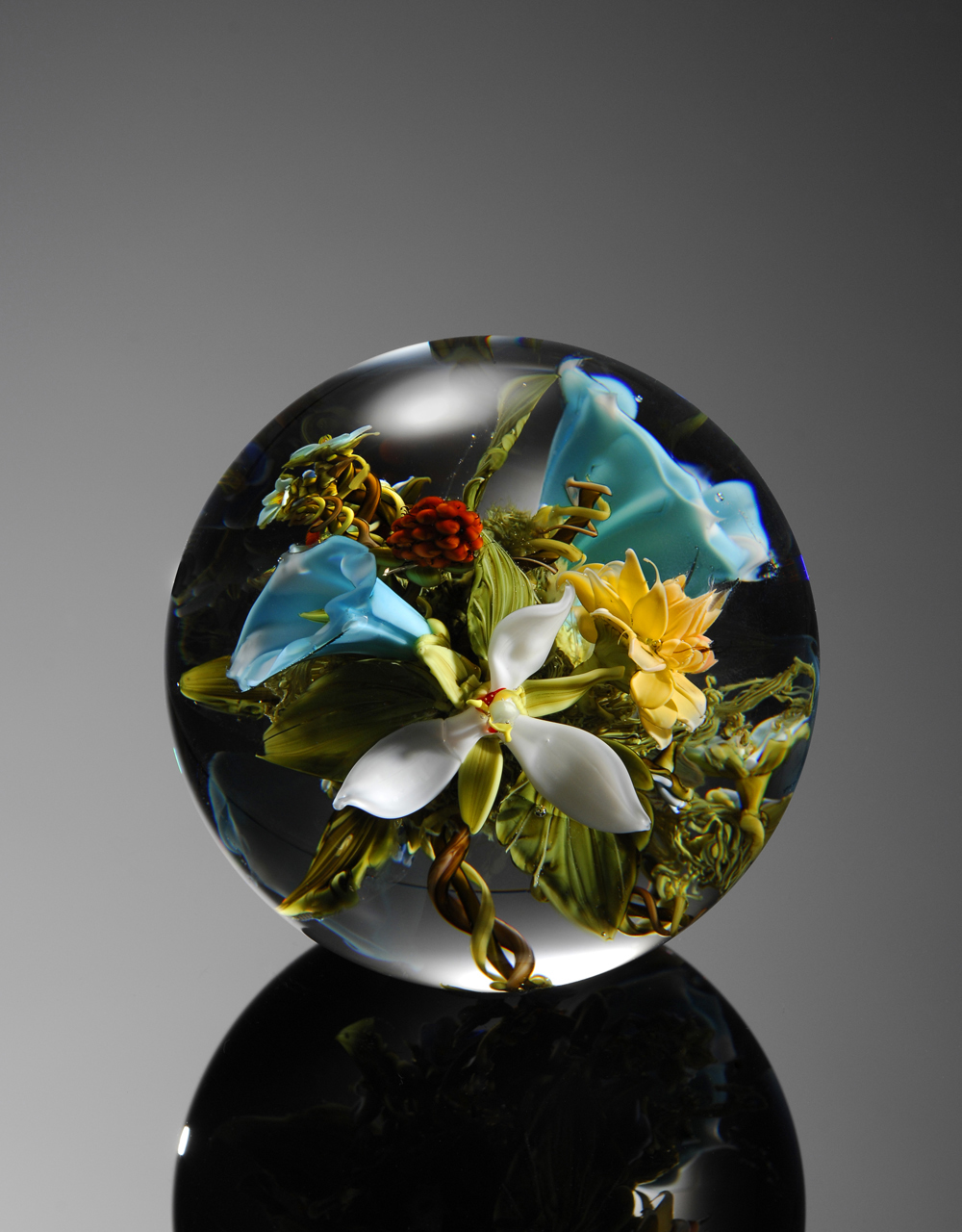 The Glass Art of Paul Stankard

A pioneer in the studio glass movement, Paul Stankard’s career has spanned more than four decades. At first glance his works appear to be simple paperweight forms. Upon closer inspection, one can see the painstakingly detailed, intricate botanical compositions, with roots that are often figurative. Stankard, who cites the poetry of James Joyce and Walt Whitman as inspiration for his miniature representations of North American wild flowers, meticulously lampworks each piece in sections that are then encased in clear glass.

The exhibition of more than 70 works is divided into categories—Paperweights, Botanicals, Cubes & Columns, Orbs and Diptychs, Triptychs & Assemblages. Paperweights examines Stankard’s radical approach to a traditional format. The artist began as a scientific glassblower and would experiment with creating flowers in his time off using a simple flameworking torch. As he became increasingly adept at making elaborate florals, the artist’s paperweights took on more detail and more complexity. He then moved into a vertical orientation that is explored through both Botanicals and the Cubes & Columns series. These works feature human forms intertwined into the root structures, symbolic orbs or spheres hovering above the composition, and ‘cloistering,’ a technique he used to strategically filter or absorb light within the sculpture.

With Orbs, Stankard moved into the realm of the 360 degree sphere. He achieved this with Robert Stephan, who grinds and polishes Stankard’s pieces. Diptychs, Triptychs & Assemblages brings together the artist’s various techniques and ideas that he had developed over thirty years. Each of these pieces is ambitious, featuring his vocabulary of artistic forms in a grid format.

Stankard is in nearly forty national and international museum collections, including the Art Institute of Chicago, the Cleveland Museum of Art, the GlasMuseum, Denmark, the Metropolitan Museum of Art, the Smithsonian Museum of American Art and the Hunter Museum.  He was elected to the College of Fellows of the American Craft Council in 2000 and has received numerous Lifetime Achievement Awards for his innovative techniques.

This exhibition is organized by the Museum of Glass, Tacoma, Washington with the Robert M. Minkoff Foundation, Ltd.

Members of the Hunter Museum Chairman’s Circle are invited to preview the exhibition of glass work by Paul Stankard and to a holiday celebration with festive food and music from the Southern Ringtones.

Members of the Hunter Museum’s Chairman’s Circle are invited to a reception with artist Paul Stankard.

with additional support from: BB&T Huffaker and Trimble